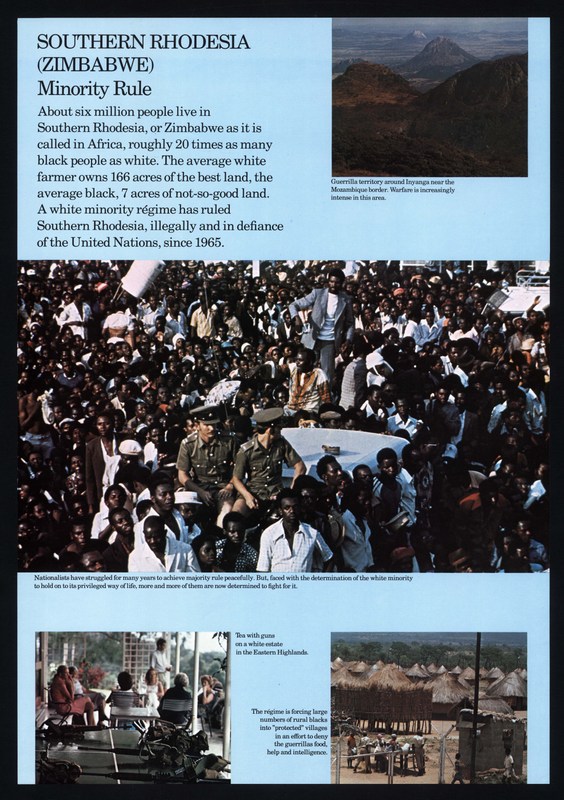 Click image to enlarge
by United Nations
New York, New York, United Nations
Undated, second half of the 1970s?
Type: Poster
Coverage in Africa: Zimbabwe
Coverage outside Africa: United Nations
Language: English
One of the posters in a photographic display set entitled THE STRUGGLE FOR INDEPENDENCE IN NAMIBIA AND SOUTHERN RHODESIA (ZIMBABWE) produced by the United Nations Office of Public Information. The poster says about six million people live in Southern Rhodesia, or Zimbabwe as it is called in Africa, roughly 20 times as many black people as white; the average white farmer owns 166 acres of the best land, the average black, 7 acres of not-so-good land; a white minority regime has ruled Southern Rhodesia, illegally and in defiance of the United Nations, since 1965. The poster says nationalists have struggled for many years to achieve majority rule peacefully; but, faced with determination of the white minority to hold onto its privileged way of life, more and more of them are now determined to fight for it. The poster says the regime is forcing large numbers of rural blacks into "protected" villages in an effort to deny the guerrillas food, help and intelligence. The poster discusses guns, a white estate, and the Eastern Highlands. This item was digitized by the International Institute of Social History which provided it to the African Activist Archive Project. Size: 52x37 centimeters.