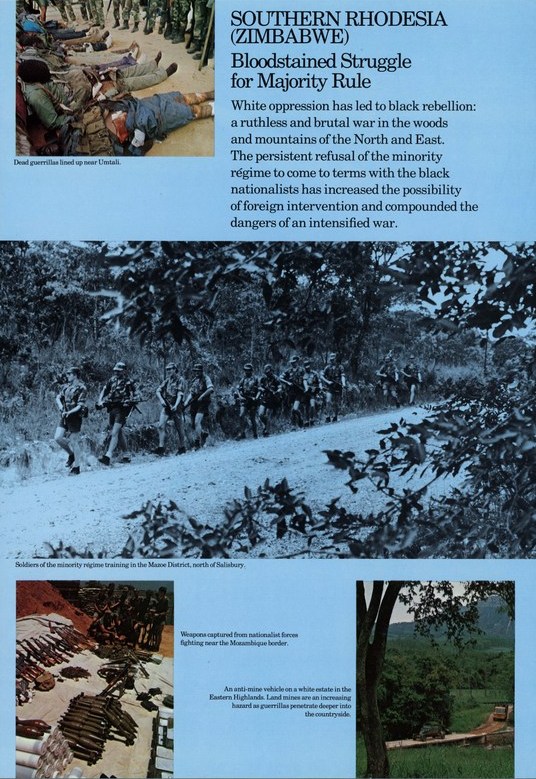 Click image to enlarge
by United Nations
New York, New York, United Nations
Undated, second half of the 1970s?
Type: Poster
Coverage in Africa: Zimbabwe
Coverage outside Africa: United Nations
Language: English
One of the posters in a photographic display set entitled THE STRUGGLE FOR INDEPENDENCE IN NAMIBIA AND SOUTHERN RHODESIA (ZIMBABWE) produced by the United Nations Office of Public Information. The poster says white oppression has led to black rebellion, a ruthless and brutal war in the woods and mountains of the North and East; the persistent refusal of the minority regime to come to terms with the black nationalists has increased the possibility of foreign intervention and compounded the dangers of an international war. The poster says land mines are an increasing hazard as guerrillas penetrate deeper into the countryside. The poster includes photographer of soldiers of the minority regime training in the Mazoe District, north of Salisbury; weapons captured from nationalist forces fighting near the Mozambique boarder; and an anti-mine vehicle on a white estate in the Eastern Highlands. This item was digitized by the International Institute of Social History which provided it to the African Activist Archive Project. Size: 52x37 centimeters. [Note: the Mazoe District may be the Mazowe District.]