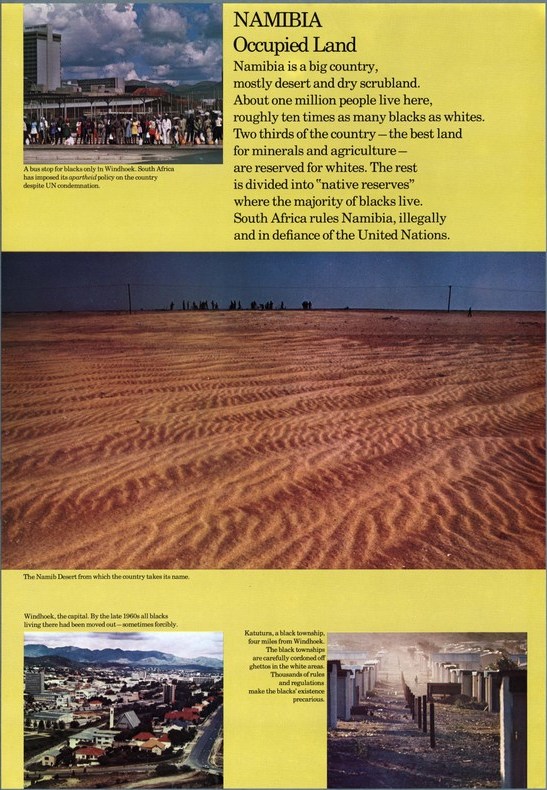 Click image to enlarge
by United Nations
New York, New York, United Nations
Undated, second half of the 1970s?
Type: Poster
Coverage in Africa: Namibia, South Africa
Coverage outside Africa: United Nations
Language: English
One of the posters in a photographic display set entitled THE STRUGGLE FOR INDEPENDENCE IN NAMIBIA AND SOUTHERN RHODESIA (ZIMBABWE) produced by the United Nations Office of Public Information. The poster says Namibia is a big country, mostly desert and dry scrubland; about one million people live here, roughly ten times as many blacks as whites; two thirds of the country - the best land for minerals and agriculture - are reserved for whites; the rest is divided into "native reserves" where the majority live; South Africa rules Namibia illegally in defiance of the United Nations. The poster says by the late 1960s all blacks living in Windhoek had been moved out. The poster says the black townships are carefully cordoned off ghettos in white areas; thousands of rules and regulations make the blacks’ existence precarious. The poster discusses Katutura and the Namib Desert. This item was digitized by the International Institute of Social History which provided it to the African Activist Archive Project. Size: 52x37 centimeters.