NAMIBIA The UN and the Struggle for Independence 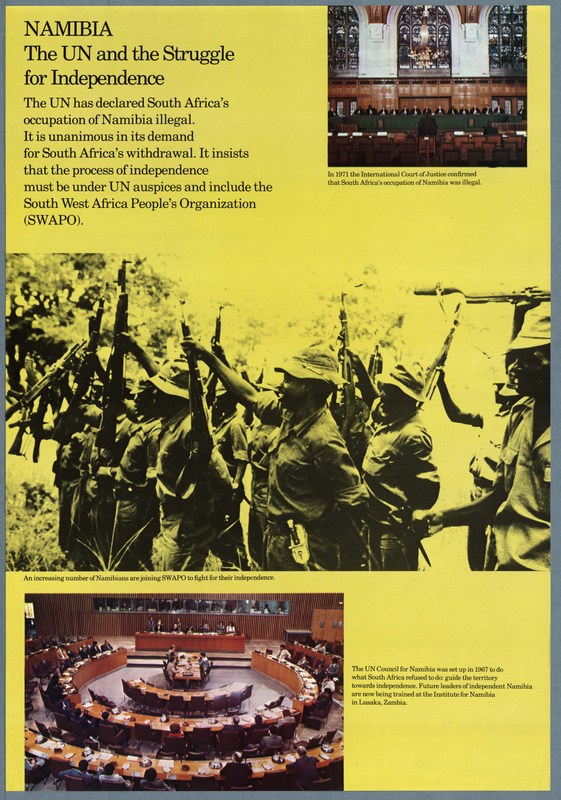 NAMIBIA The UN and the Struggle for Independence

Click image to enlarge
by United Nations
New York, New York, United Nations
Undated, second half of the 1970s?
Type: Poster
Coverage in Africa: Namibia, South Africa
Coverage outside Africa: United Nations
Language: English
One of the posters in a photographic display set entitled THE STRUGGLE FOR INDEPENDENCE IN NAMIBIA AND SOUTHERN RHODESIA (ZIMBABWE) produced by the United Nations Office of Public Information. The poster says the UN has declared South Africa's occupation of Namibia as illegal; it is unanimous in demanding South Africa’s withdrawal; in insists that the process of independence must be under UN auspices and include the South West African People's Organization (SWAPO). The poster says the UN Council for Namibia was set up in 1967 to do what South Africa has refused to do: guide the territory towards independence; future leaders on independent Namibia are not being trained at the UN Institute for Namibia in Lusaka, Zambia. This item was digitized by the International Institute of Social History which provided it to the African Activist Archive Project. Size: 52x37 centimeters.