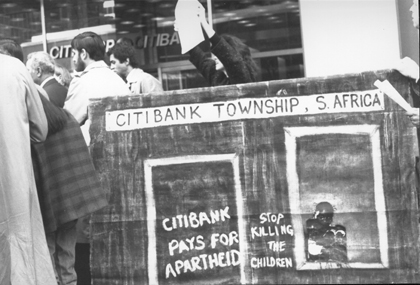 Demonstration outside Citibank headquarters protesting the bank’s involvement in South Africa. Citibank was one of the largest international lenders to South Africa, with an estimated $666 million in outstanding loans at the time. In September 1985, because of massive capital flight including other banks refusing to make new loans or to roll over existing loans, the South African government declared a debt repayment standstill, thus blocking loan repayments. Many international loans, including those of Citibank, were short-term loans but had been regularly rolled over. International banks and the South African government subsequently reached an Interim Agreement that allowed banks to convert existing blocked loans to long-term exit loans. The African National Congress, Desmond Tutu, and international anti-apartheid activists all opposed banks making such conversions. Citibank converted all its loans to long-term exit loans. Because of the debt standstill, Citibank stopped making cross-border loans to South Africa and in 1987 sold its subsidiary in South Africa. Photograph courtesy of the Interfaith Center on Corporate Responsibility (ICCR). This photograph was digitized by Clarity Films.

Used by permission of the Interfaith Center on Corporate Responsibility.